An attempt to find a generalized approach for shuffling a very large list that does not fit in memory. I explore the creation of generators that sample items without repeats using random number generators.

For one of my projects, I need to generate a random permutation (without repetition) of the integers from 0 to n. In my particular situation, I am generating permutations for large n and I am only using a small portion of the values at the beginning of sampled permutation (e.g., generating a permutation of a shorter length k, where k is small but n is large). My initial approach was to build an array of values from 0 to n and then shuffling it using the Fisher-Yates algorithm. However, for large values of n, I am unable to hold all of the elements in memory (in Java, I get a heap overflow), so I started looking for more memory efficient approaches that let me generate the elements of a random permutation as needed. In essence, I am looking for an algorithm to do a lazy list shuffle.

I did some googling and found this approach, which consists of constructing a finite field given a prime modulus m; e.g., \(aX\) mod \(m\) for \(a = 1,2,3, \cdots, n\). We know that the field contains the numbers \(1 \cdots m-1\) when m is prime (I think it was Gauss that showed this in his book Disquisitiones Arithmeticae). This ensures that we generate all of the values in the desired range at some point. However, sometimes it generates additional values (when m is larger than the size of the range). In these cases, we can simply ignore values outside the range and keep generating values until they are in the desired range. This approach, which comes from the work on format-preserving encryption</a>, is actually pretty efficient if m is not that much larger than the size of the range because only a small portion of values are invalid. Thus, this approach works by selecting the smallest prime \(m\) larger than the size of the range we want to generate, selecting a random generator \(a\), and selecting an initial seed \(X_0\). Then we can generate successive values using the relation \(X_n = X_{n-1} + a\) mod \(m\). While this approach can be used to lazily generate the elements of a random permutation with constant memory, some of my early testing showed that the permutations generated are not actually that random.

Before conducting any evaluation, a simple analysis of the algorithms shows that the three new functions use constant memory because we don’t retain any of the elements of the permutations and simply use the last value in the permutation sequence to generate the next. This is substantially better than the shuffledrange function that generates the entire range in memory and shuffles it with the Fisher-Yates algorithm. Next, I wanted to get a sense of how random each approach is, so I plotted the output of each function for generating a permutation of the values from \(0 \cdots 100\). Here are the four plots: 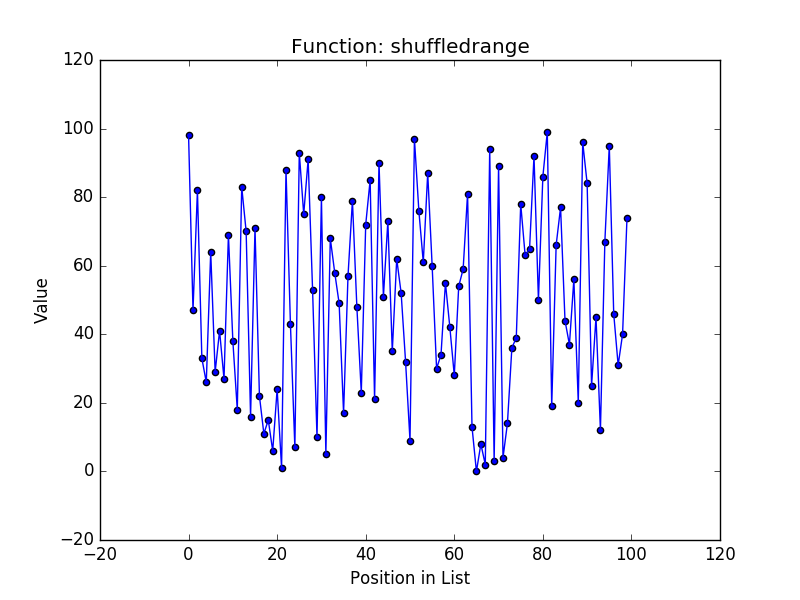 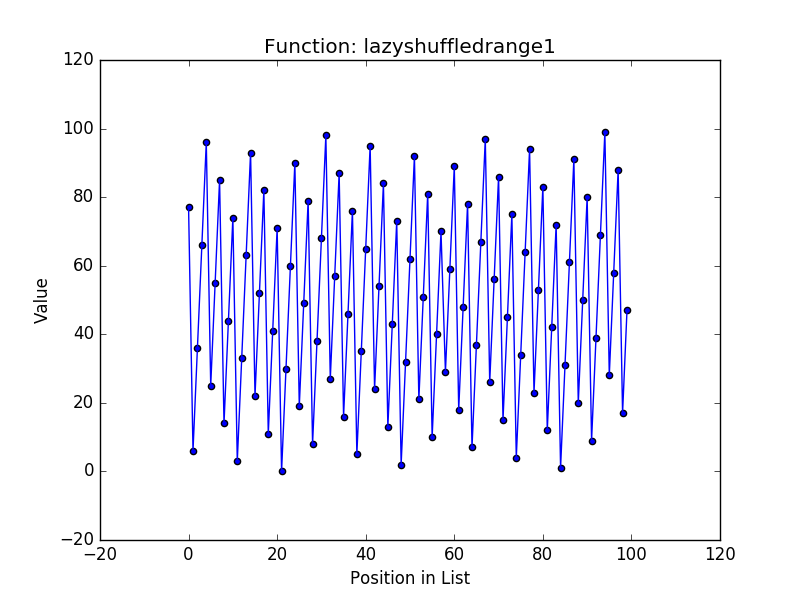 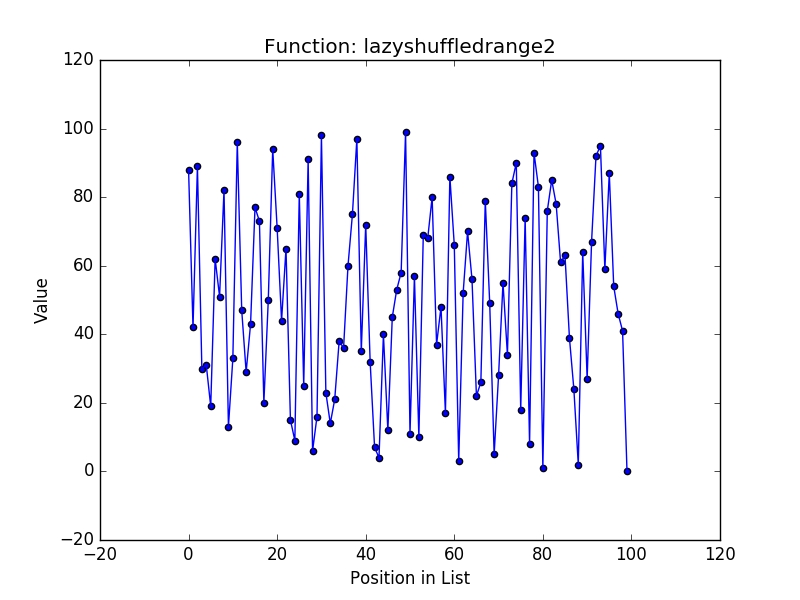 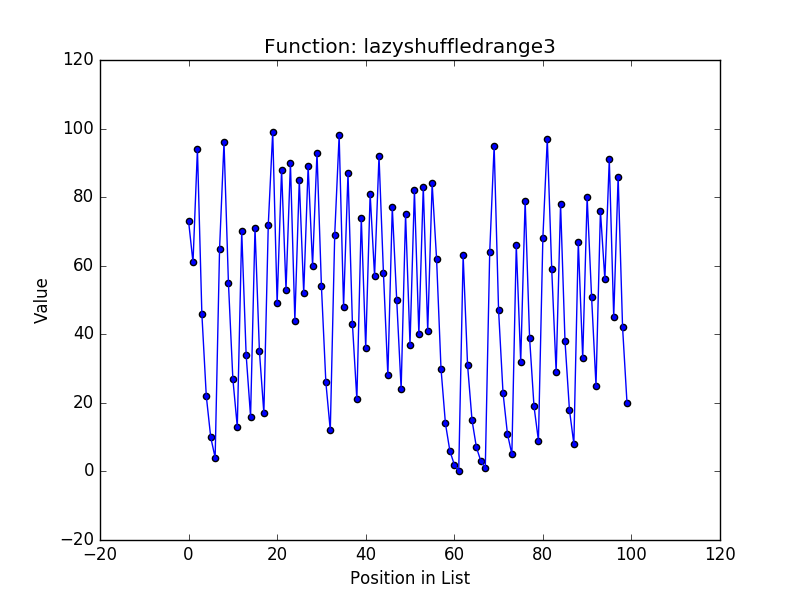 Next, I tested how fast each of these approaches is. To do this, I used python’s “timeit” function to test how quickly each function could generate a permutation of the values \(0 \cdots 1000\). As an additional check of the randomness, I measured the spearman correlation of the generated values with their position in the list. For both the timing and correlation tests, I ran each approach 3 times and picked the fastest of the three runs, as well as the lowest correlation, to get a sense of best case for each approach. Here are the results:

Next, to get a sense of how these approaches scale, I timed each function for ranges of increasing size. Here is a timing data plotted for each algorithm for ranges of size 10, 100, 1000, and 10000: 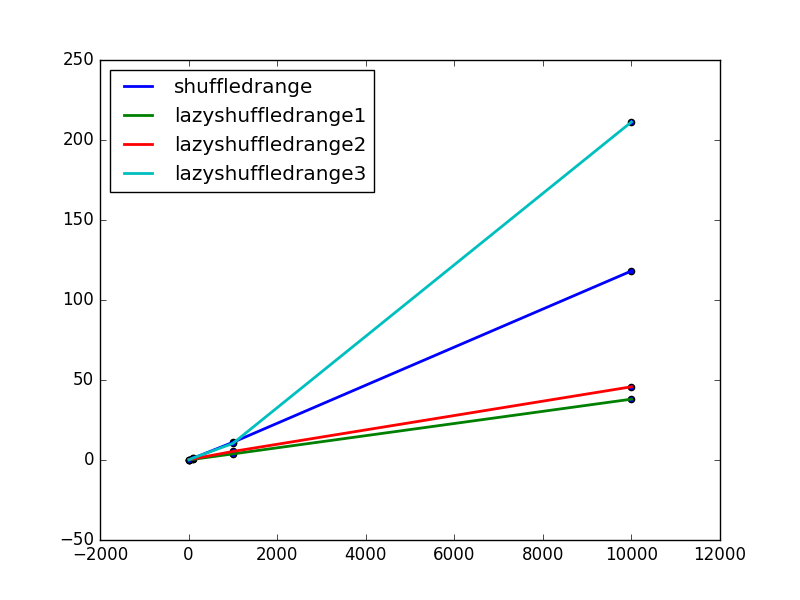 As a final test, I wanted to see if repeated calls to each algorithm were uniformly sampling from the space of possible permutations. To evaluate this, I chose a small range (\(0 \cdots 6\)) and called each function 1000 times given this range. Here I plotted the histograms over the resulting permutations: 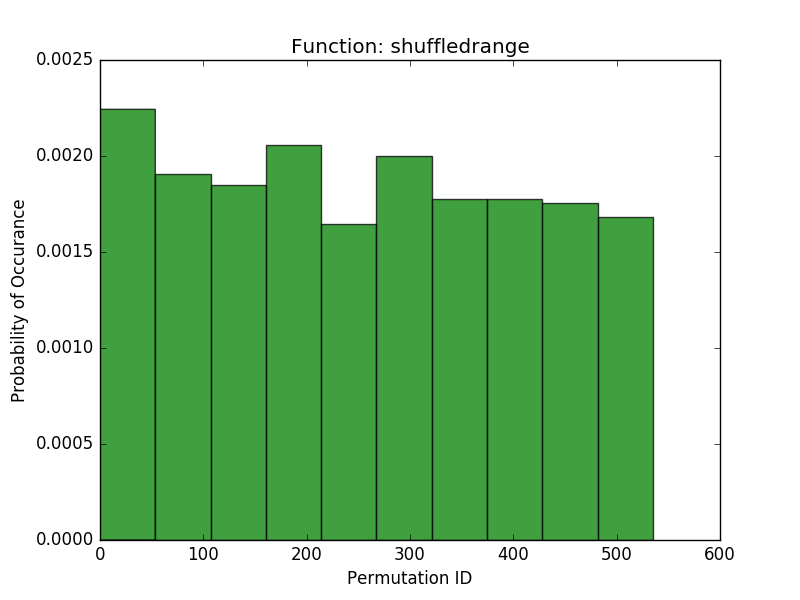 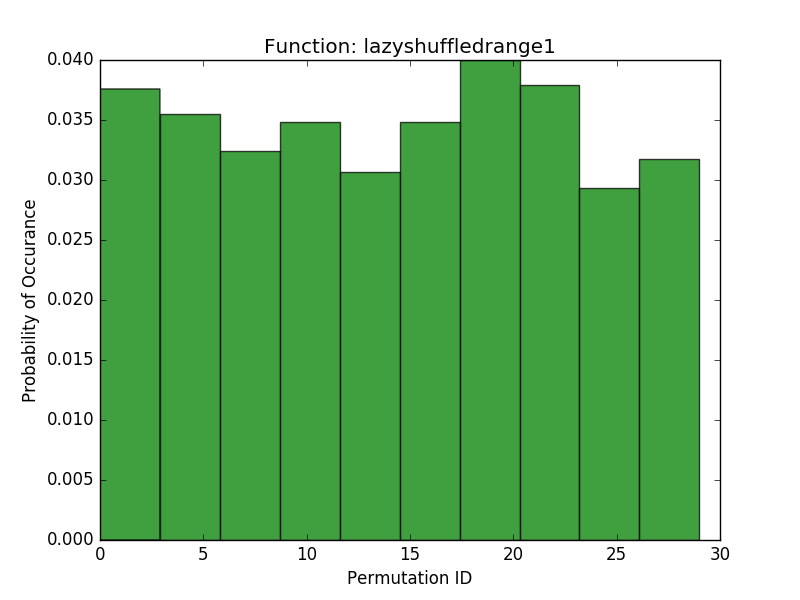 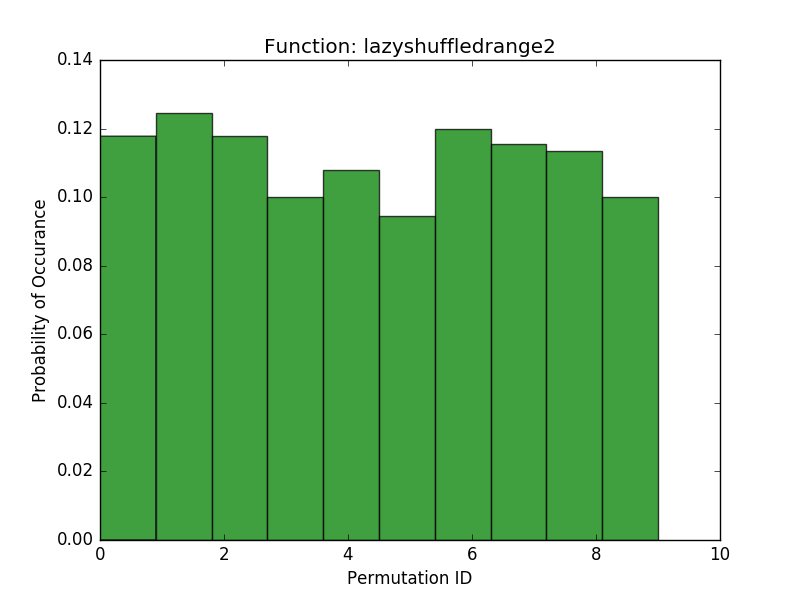 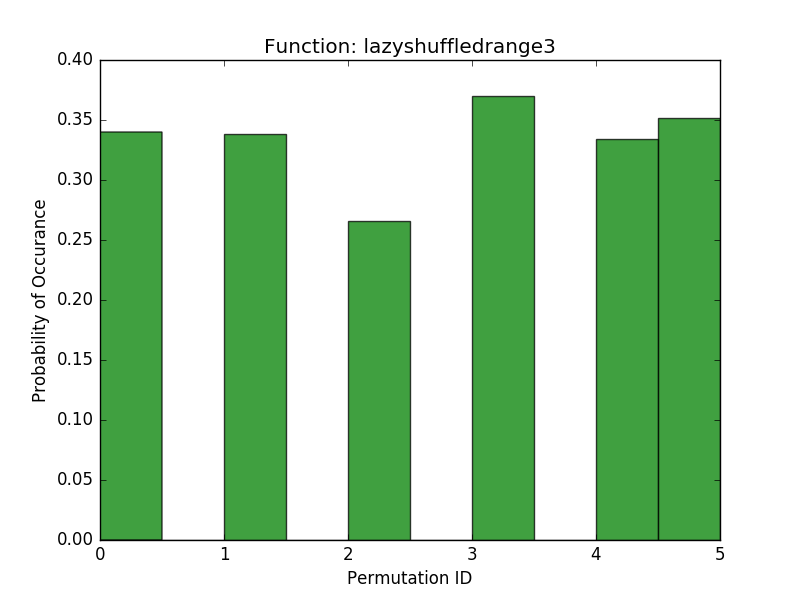 These results show that the shuffledrange (Fisher-Yates) seems to approach a uniform probability of each permutation (although the pydocs make note that for large n, not all permutations may be possible). Our more memory efficient approaches seem to have a pretty uniform probability of each permutation that they generate, but they are all limited in the number of permutations they can generate. The lazyshuffledrange1 (the additive congruential generator) seems to generate the most permutations, and lazyshuffledrange3 (the linear feedback shift register) generates the smallest number of permutations. Lazyshuffledrange2 (the multiplicative congruential generator) is somewhere in the middle. If one is interested in generating the full space of possible permutations, then this is a troublesome result. On the other hand, the results do make some sense. The number of permutations generated corresponds roughly to the number of possible states for the generators. For example, lazyshuffledrange1 accepts a generator \(a\) between 1 and the modulus and a seed between 1 and the size of the range. If our range is length 6, then the modulus is 7 (the smallest prime larger than 6) and \(a \in [2, 6]\) and \(seed \in [0,5]\), so there are 30 possible initial conditions, which agrees with the number of permutations we see in the histogram. By contrast, the lazyshuffledrange2 function also uses the modulus 7 (the smallest prime larger than the size of the range), but \(a \in \{3, 5\}\) (there are only 2 primitive roots mod 7, see this table) and \(seed \in [1,5]\) (a multiplicative congruential generator cannot start off at 0), so there are only 10 possible initial conditions, which agrees with the histogram results. Finally, the linear feedback shift register has fixed primitive roots (because I used a prebuilt table), so its only parameter is \(seed \in [0,5]\), or 6 initial conditions, which also agrees with the histogram results. In order to support more possible permutations we could increase the prime modulus of these generators until the number of possible permutations is large enough. However, this will take more computing power (because more of the values in the finite field are outside the range and more iterations will need to be performed to get values within the range).

As a basic test of this idea, I increased the modulus of the lazyshuffledrange2 function to be the smallest prime larger than 2 times the size of the range, which resulted in the following histogram: 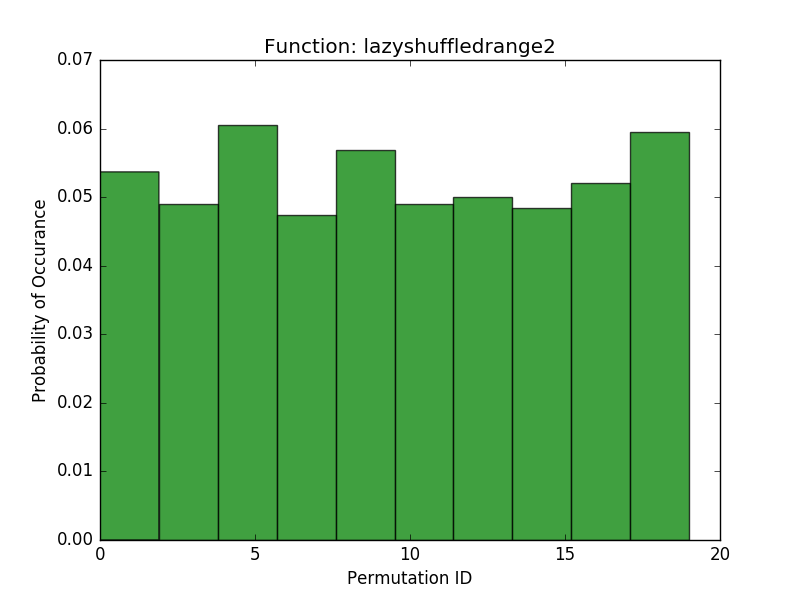 If any readers have thoughts on how I can increase the possible permutations that can be generated by any of my proposed approaches, I would love to hear about it!