An argument against the theory that our brains continue to work on hard problems when we take breaks. Instead, I argue that we forget failed attempts, but maintain important metadata that facilitates a rapid solution on follow up attempts.

Insight problems, or problems that are nearly impossible to solve without the crucial insight (with which they become trivial), are an interesting class of problems lead individuals to interesting conclusions about the subconscious mind. Namely, the experience of insight hints at our subconscious autonomously solving problems for us and magically making the solution aware to our conscious mind after the hard work has been done. I would argue that this conclusion is ill-founded and that it is quite unlikely that our subconscious performs autonomous problem solving. Instead the act of taking a break or resting leads our mind to go through a forgetting process where we eliminate false assumptions that prevented us from finding a solution. With these limiting false assumptions forgotten, the solution then becomes within reach of our conscious mind.

Lately I have been studying insight and creativity in people and trying to figure out how such processes can be modeled with computers. Insight problems are tricky problems that have the distinctive characteristic that they are nearly unsolvable until one possesses the necessary insight to solve them, at which point the problems become trivial. As an example see the following figure. This figure composes the nine dots problem. The goal is to connect all the dots by drawing four lines without picking up your pen and never retracing your lines (solution available here). This problem is one of my favorite because it is nearly impossible to solve the problem without first seeing the solution but once you see the solution you will forever be able to solve the problem. The process one goes through to solve these problems happens to be very similar to that which people go through when solving real world problems. 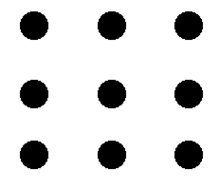 Nine Dots Problem: connect all the dots by drawing four lines without lifting your pen or retracing a line.

One of my favorite stories of real world insight is when Archimedes discovered the principle of displacement. It was said that he was tasked with determining if the king’s crown was in fact made of pure gold. To perform the necessary calculation he needed to know the volume of the crown (having known the density of gold and the weight of the crown) but since it was irregularly shaped he had no way of calculating it, short of melting it down (which he couldn’t do). After tirelessly attempting to solve the problem Archimedes finally gave up. To help relax after his hard work he decided to take a bath. Upon slipping into the water he observed that the water level rose due to the displacement of water by his body. Eureka! He immediately knew how to calculate the volume of the crown by submersing it in water and measuring the volume of water that had been displaced. This process of futile attempts to solve a problem followed by giving up and then having crucial insight leading to a solution is a pattern across all fields and disciplines.

When originally approaching the problem I shared a similar prospective to that of the French mathematician Henri Poincaré. That when one works hard enough on a problem the chunks of information become available to the subconscious mind, enabling it to work on your behalf while sleeping and performing other activities. When the subconscious mind solves the problem it makes it aware to your conscious mind and you experience a flash of insight and immediately know the solution. This hypothesis often called the autonomous-process hypothesis is a very popular theory among many scientists who have experienced this (myself included). After throughly researching the subject I am convinced that this hypothesis is ill-founded.

This explanation for insight while less magical is more likely to be correct as it is supported by the literature that I have read. It would appear that all problem solving is a conscious mindful task and the subconscious mind isn’t some mystical calculator which is more powerful then our conscious mind. It makes me think that movies like “Limitless” which purport making someone super intelligent by tapping into their unused brain power is in fact preposterous no matter how good of a movie it makes.

This does hint at some interesting future work for artificial intelligence. How does the human mind make search space limiting assumptions? These assumptions make problem solving tractable for humans and could probably do so for computers. Additionally how does one know which assumptions to forget and which to keep? These are problems I am currently exploring.